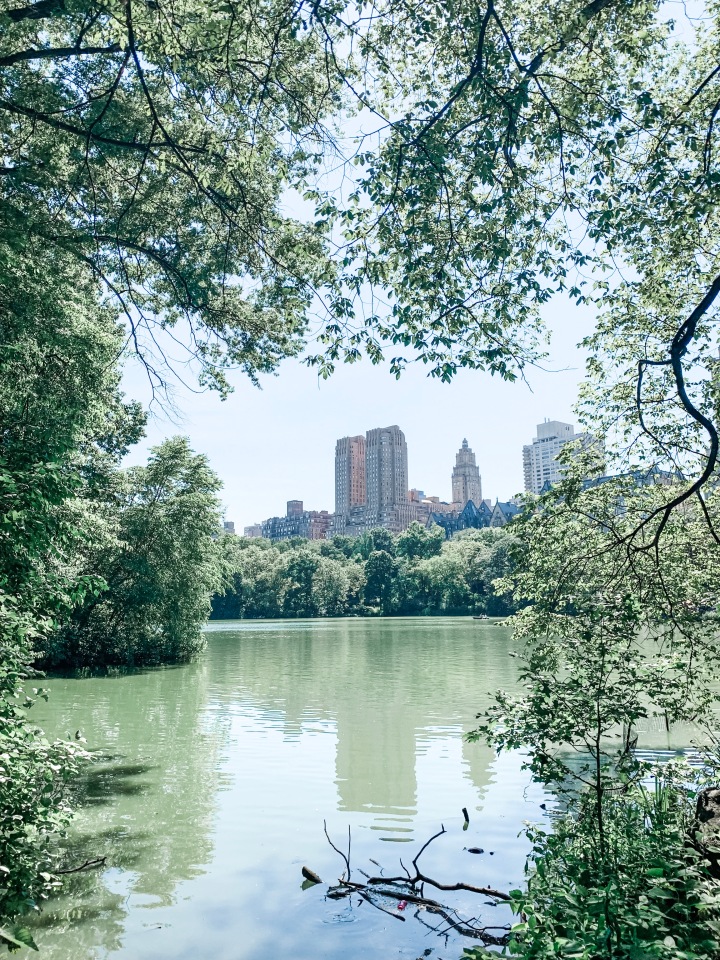 Our trip to NYC was short and sweet but so much fun. We saw all the things we wanted to see and ate all the things we wanted to eat, the eating being the most important part of the trip. Just kiddingggg. We had a rough draft of our plan going in to the trip but didn’t want to limit ourselves to a strict schedule because some of the best things happen spontaneously. Here’s a day-by-day look at what we did, what we saw, and what we ate!

Monday was our travel day from Birmingham to Atlanta to the city. Flying out of the BHM airport is super overpriced so we avoid it at all cost, meaning that we drive two hours to ATL to fly most places. We just have to remember that it’s in a different time zone and an hour ahead… we’ve forgotten this crucial detail before haha. Our flight unfortunately got delayed by an hour so we didn’t land at JFK until around 10:45 PM. Though we planned on using the subway for most of our transportation, experimenting that late at night with luggage didn’t seem like the best idea (and I think they stop running around that time anyways). Uber seemed like the next best option and it really was super convenient and reliable, definitely suggested if you’re landing in an unfamiliar city later at night. We made it to our hotel, Hotel Indigo on the Lower East Side, at 11:30 and basically went straight to the room and crashed. Good sleep is so so important for me when I’m on a more active vacation, and this vacation was definitely that.

Our morning started out right when we chose the cutest little cafe called Good Thanks for breakfast. They’re coffee was amazing and reminded us of our favorite coffee shop that used to be in Birmingham — Octane, we’ll never forget you. After that, we hopped on the subway and managed to successfully make it to the closest subway stop to the 9/11 memorial. We knew going into it that the 9/11 museum ($26 a person) would be both amazing and sobering so we decided to make this our first stop for two reasons. First, we wanted to be able to spend as much time as needed to see and appreciate everything. Two, we wanted to have fun and enjoy ourselves on the rest of the trip and we felt like doing the museum in the middle or at the end would be a little more sad. With that said, the museum was truly amazing to see. We spent 3 full hours winding our way through all of the exhibits and left feeling the weight of that day all over again. If you ever go to NYC the 9/11 museum is a MUST. It’s a crucial day in our nation’s history and it will give you a whole new perspective. Once we finished the museum and seeing the memorial outside, we stopped for lunch at a local spot (not worth mentioning, unfortunately) and then walked down to Battery Park at the very bottom of Manhattan. We didn’t have enough time to actually take the ferry over to the Statue of Liberty and Ellis Island on this trip so we just looked at them from the edge of the park, but it also wasn’t a huge priority so we’ll probably do that next time. Then, on our way back to the subway, we walked through the financial district and down Wall St at Tyler’s request. The American Museum of Natural History was next ($23 for adults + extra for special exhibits), and though it was interesting, it was my absolute favorite for the money we payed to see it. That night we met up with some of my family that lives in the area for dinner at Il Cortile in Little Italy. This place was SO GOOD. They hand make several of their pastas and experiencing the deliciousness of handmade pasta at least once is a necessity. The wine, coffee, and desserts were also amazing and we left completely full and a little bit tipsy haha. Apparently we hadn’t had enough and decided to walk all the way from Little Italy up to the Empire State Building just for fun… It was the longest walk of my life but the weather was perfect, unlike my shoe choice.

On day two we started off at another great restaurant right by our hotel called Clinton Street Baking Company — they have the best pancakes and French toast! We then headed to Grand Central Station via subway to see the famous constellation ceiling in the main concourse. I had been there before but it really is just as beautiful every time you see it. Then we headed up through Central Park, which is always amazing when you realize just how large it is to be right in the middle of an urban city. It’s so well planned and has so many beautiful areas to spend time outside. You can go to see Shakespear in the park at the Delacorte Theater, have a picnic at or play on the Great Lawn, rent a boat to row around the lake, visit the Central Park Zoo or Conservatory Garden, or any of the other numerous things to do in the park. We went to the MET ($25 for adults) next because it’s right on the edge of the park. Art always amazes me because there is so much of it but no one thing looks the same! And it comes in so many forms. I loved looking at the Impressionist paintings — Monet is my favorite — and Tyler thoroughly enjoyed the exhibit that featured armor through the ages. What a typical boy. If you enjoy art at all, the MET is worth every cent because it’s so large and has every type of art you could imagine.

After that we went to probably my favorite little cafe I’ve ever been too, Le Pain Quotidien. Happening upon this adorable little french themed cafe was a stroke of pure luck. We wanted something light to eat so we decided to share some avocado toast and then get a pastry and some coffee and let me tell you. It was the best freaking avo toast I’ve ever had. EVER. I can’t even tell you how much I loved and enjoyed every bit of it. I would go back to NYC just for this toast. No joke. Do yourself a favor, go try it for yourself. One of the things I absolutely love about this city is that you will never be able to eat at all the different restaurants and you can always happen upon an amazing new find. There’s always something new to try! You’ll definitely eat some of the best food ever here and what’s great is that it doesn’t have to cost a fortune. Another example would be Van Leeuwin Artisan Ice cream. I have no idea why it has such a weird name, but it doesn’t even matter. Their salted caramel ice cream was to die for. Basically, plan to eat a lot of calories.

On our last full day we planned to walk the Brooklyn Bridge and then find some things to do over there before heading back into Manhattan for the evening. The bridge was gorgeous and the views were spectacular and one of a kind, I can’t lie. However, I won’t fool you, the walk is LONG and there’s no where to hide from the sun up there. Walk the bridge, but bring water (or be prepared to buy some from the vendors on the bridge), sunscreen, a hat, and comfortable shoes. You’d think the last one would be obvious, but I made that mistake and let me tell you… It was a big mistake. My feet still have scars from the blisters my shoes caused haha. Once in Brooklyn we decided to rent two of the Citi bikes and peddle around the burrow which is really a great idea. You get to see more things in less time, which is exactly what we were looking for. To get a Citi bike, be prepared to download an app and pay $3 for a single 30 minute ride, $12 for a day pass, or $24 for a 3 day pass. If you’re ever planning on renting one and going for a ride, though, watch out for all the cars! Usually there’s a bike lane, but sometimes you have to make your own. We also got to see the botanical gardens in Brooklyn and they were gorgeous. They were really well done and so peaceful and quiet. They actually charge $15 for adult admissions, which is odd to me because our garden is free in Birmingham, but I think that’s the reason it was peaceful and not overcrowded. If you like parks and flowers, it was a great place to spend some time and even catch an easy lunch at their little cafe. Unfortunately for me, my blistered feet kept me from fully enjoying it because I lost all ability to think about anything other than my blistered feet while walking ha.

To end our trip, we decided to do the most classically New York City thing you can possibly do. We saw a Broadway musical, and not just ANY musical, we saw Wicked! Honestly, we weren’t planning on getting to see one while we were there because they can be so insanely expensive. Like $400 a ticket expensive. Ain’t nobody got time for that. But then we heard about the ticket booth in Times Square and the fact that they sell super discounted day-of tickets to shows that aren’t sold out. We, read I, were so excited when we found tickets to Wicked at such a great price. The best part is that the show was seriously so amazing. Even Tyler loved it and he avoids any form of entertainment that contains music. No movies, no musicals, none of that. He wouldn’t even watch The Greatest Showman with me when it came out! I can’t recommend Wicked enough. It’s a classic and I would 100% watch it again if given the chance.

The only notable thing about our last day was the cute little coffee shop we went to for breakfast before we packed up and headed to the airport. Ludlow Coffee Supply was directly across the street from our hotel and was some of the best coffee we had the entire trip. It was so so good and the atmosphere was great, and we all know that’s what really matters in a coffee shop.

There was an error retrieving images from Instagram. An attempt will be remade in a few minutes.